I have practiced acupuncture and traditional Asian medicine in the Pioneer Valley area of western Massachusetts for more than three decades, treating a wide range of chronic health disorders, with a sub-specialty in sports medicine and the treatment of chronic pain and concussions. 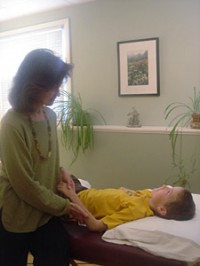 medicine. There were actually several routes “in”–that first acupressure point someone taught me that cured sore throats in a flash, for instance–but probably the most durable path began when I started receiving treatments with local acupressurist Sam McClellan in the early 1980’s. I still remember the morning after my first acupressure treatment with Sam. Although I didn’t have any major health problems, for several months I had been waking up feeling like I had been hit by a truck. This sluggishness was pretty unusual for me; I have always loved mornings and gotten up easily. After my first acupressure treatment, I literally sprang out of bed the next morning, the hit-by-truck feeling gone–permanently, as it turns out. I remember thinking, “We are definitely on to something.”

I went on to take classes with Sam and then practice acupressure before eventually deciding to go to acupuncture school. And I have been in love with traditional Asian medicine ever since. On a personal level, it has helped myself and my family immeasurably. And every week in my practice I get to see its magic help others as well in their healing journeys.

In the early 1990s,  several colleagues and myself organized and staffed the first acupuncture-detoxification clinic for alcoholics and drug addicts in western Massachusetts, at Gandara Center in Springfield. More recently I started and now staff an acupuncture clinic at a federally-qualified community health center in central Massachusetts. I have also lectured and taught extensively on the subject of Chinese medicine.

I have additional training and certification (when available) in acupressure (see above), Chinese herbal medicine, pediatric medical massage (pediatric tuina), AcuQuitSM for smoking cessation, Toyo Hari Japanese-acupuncture techniques, hands-on energy healing techniques of Reiki (Level 2 certification) and Reconnective Healing (Level 3 certification), acupuncture facial rejuvenation, and Acutonics® (the use of tuning forks on acupuncture points). I have worked closely with the sports-medicine departments at Mt. Holyoke College in South Hadley, MA, and the University of Massachusetts at Amherst, as well as maintaining my private practice in Amherst.

Originally from Miami, Florida, I graduated from UMass Amherst with a degree in economics–and being a data/numbers geek, it is a field of study I still adore. After early work as a community organizer, I began my acupressure and then acupuncture study and eventual career(s) beginning in the early 1980’s. I am a retired call firefighter and municipal treasurer-collector, the parent of a college student (who enjoyed much acupuncture and acupressure growing up!), and an advocate for single-payer healthcare reform and civic engagement. In my spare time, I enjoy running, biking, hiking, writing, and gardening as well as practicing yoga, Dragon and Tiger qigong, and Wu-style t’ai chi.

Serving Amherst, Northampton, western MA, and the Pioneer Valley since 1986